Just added to your basket

Free shipping on all cases of 24 bottles!

What is Low ABV Beer?

There are a lot of words flying around bar and restaurant drink menus, with emerging definitions challenging the concept of what alcohol can be classified as. ‘Low and No Pours’, ‘Light Drinks’, ‘Zero Proof’, ‘Sans List’ – it’s all much of the same yet still slightly confusing. So to lighten the load, we’ve outlined what on Earth is going on, as well as where Small Beer has pitched up camp in this delightful world of possibilities.

ABV stands for Alcohol By Volume and is used to determine how alcoholic a drink is. Labels tend to depict ABV by using ‘[insert number]% Vol’, with a higher number indicating a more alcoholic drink. What you do with that information is up to you.

Pub beer badges have played the numbers game since the start of time, with traditional low ABV ales at one end of the spectrum and ever-increasingly punchy craft beers pushing the boundaries with 7% IPAs and beyond. If you’re the observant type you may have spotted some no and low ABV beer lining the fridges behind your trusty bartender. With an ever increasing demand for low and non-alcoholic drink offerings, those beers are leaping across the treacherous chasm of the backbar to appear proudly on draught. 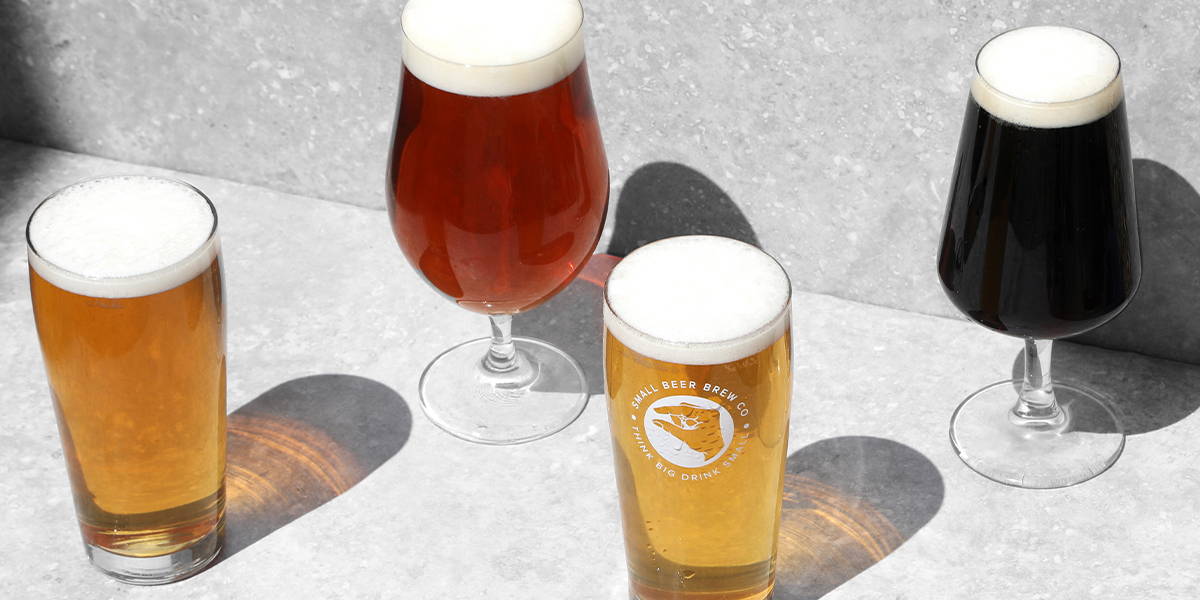 Non-alcoholic beers are essentially defined as 0.5% ABV and below. There is no license required to sell them. Though this might sound like someone is trying to sidestep their taxes, most things that go through a natural fermentation process will have some trace of alcohol in them – like bananas, fruit juices, vinegar and bread. With 0.5% ABV mirroring a naturally occurring level of alcohol, it’s seen as a negligible presence in beer and can therefore be considered alcohol-free. In our opinion, the sweet spot lies one step further, in the perfectly formed offering of low ABV beer.

what is low ABV beer?

As the name suggests, these are lower-strength beers that still contain alcohol, but at lower levels than typically found. Low ABV beers tend to sit below 3.5% ABV. This means that it’s much more likely your beer will deliver the natural body and mouthfeel that you expect from a ‘bigger beer’, without the need for additives such as lactose, as some non-alcoholic beers are known to do. Much like an aperitif or spritz, Low ABV beer promises the delicious frivolity of alcohol with an effortless level of moderation. Lower alcohol beers may also serve as a healthier beer option, due to their tendency to be lower in calories, carbohydrates and sugar.

Low ABV beer is nothing new. As early as the 1600s, the category of Small Beer emerged to cater across British society as a nutritious and safe way to hydrate when drinking unpurified water was too dangerous. With the natural diuretic limit sitting at 3.0% ABV, anything below is technically more hydrating than it is dehydrating. This explains why a ‘true Small Beer session’ provides that warming buzz, without leaving you walking sideways.

Shadows of the everyday role small beer used to play still lie in the popularity of table beer, which is slightly higher in alcohol (roughly 2.8-3.8%), but still stands as a low ABV beer in comparison to big beer counterparts. While small beer has undergone a brief hiatus from UK drinking culture (until we reinvigorated the category), table beer is still brewed and enjoyed across the masses.

At Small Beer Brew Co., we truly believe that the future of the Low and No movement lies in Low ABV beer, as it bridges the gap between the extremes of ‘drinking’ and ‘not drinking’ – where moderation doesn’t mean compromise and taste isn’t prioritised after strength. We are the world’s first brewery to specialise in the sole creation of classic beer styles below 2.8% ABV.

The Original Small Beer Lager is a classic Pilsner-style lager with a familiar continental bitterness. While the average lager might sit at somewhere around 5% ABV, ours offers all the same bright, crisp flavours at a refreshing 2.1% ABV.

The Original Small Beer Session Pale is a mouth-wateringly juicy pale ale that champions the word "session", providing a burst of tropical fruit and hops at 2.5% ABV.

The Original Small Beer Steam is our take on the California Common, typically brewed to about 6% ABV. Ours is a beautiful hybrid, bridging the gap between a lager and an ale and sits comfortably at 2.7% ABV.

The Original Small Beer Dark Lager is all coffee, toast and dark chocolate. Although it noses like a stout or porter, which can be found upwards of 12% ABV, our Dark Lager is a truly unique brew at only 1.0% ABV. 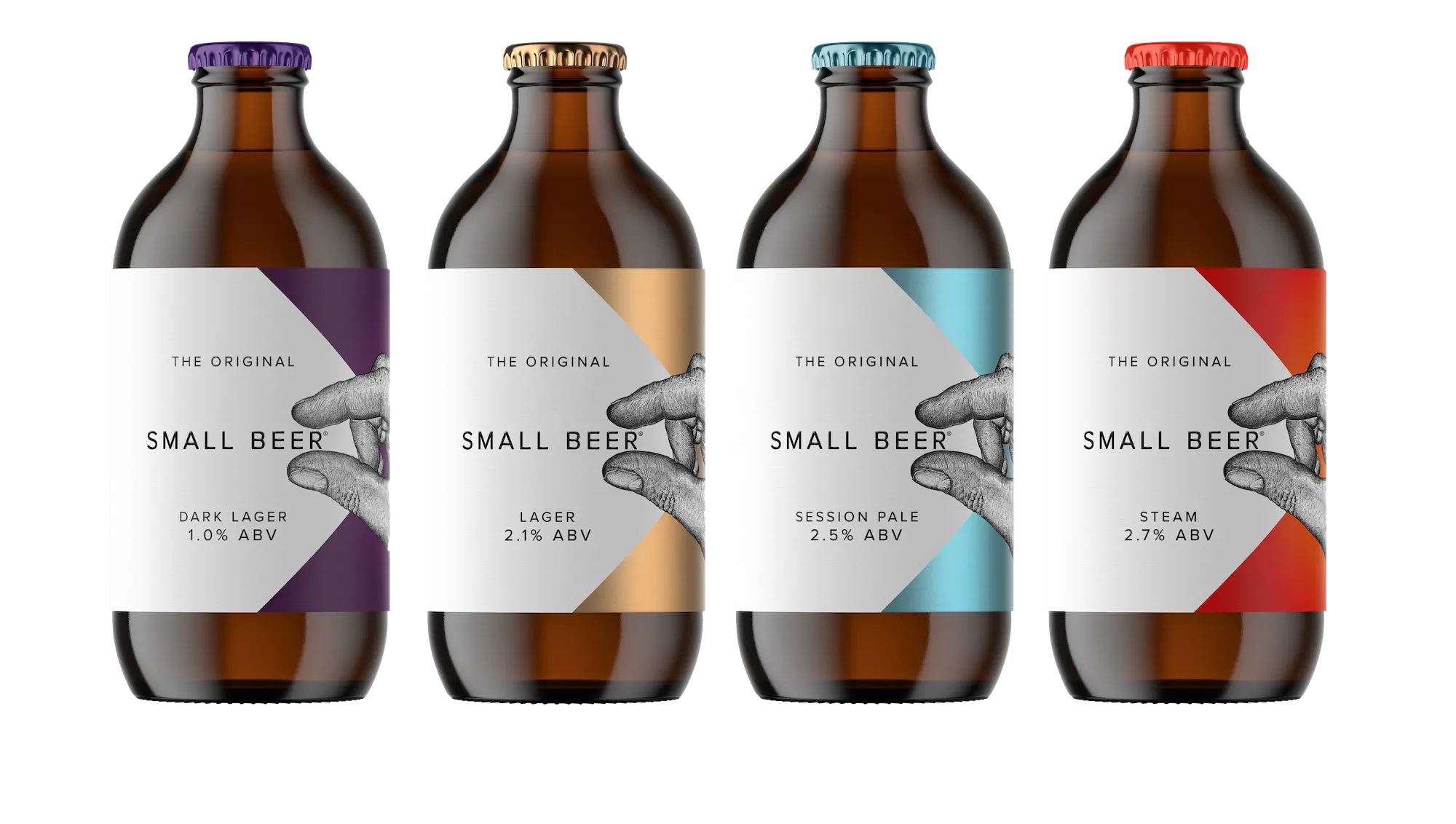