You might assume that all beer is vegan. Despite being brewed from plant-based ingredients, many beers are clarified using ‘finings’ of animal origin. In addition, lactose is often used to build body in stouts and low alcohol beers...but not ours!

Instead, we use twice the amount of ingredients per percentage point brewed and store our beers far longer than the industry standard, giving the yeast and protein sufficient time to naturally settle out. The result gives us a range of four versatile beer styles below 2.8% that are all vegan friendly.

What can make beer non-vegan?

Malted barley, yeast, hops and water spring to mind when contemplating what’s in your pint glass. Oats, rye and wheat are often used to further create different beer styles. So far, all plant-based ingredients. There are two common ways that animal-based materials may be used in the creation of beer, either as an additive for flavour and body or as a clarifying agent used in the ‘fining’ process.

The Vegan Society define veganism as:

‘a way of living which seeks to exclude, as far as possible and practicable, all forms of exploitation of, and cruelty to animals for food, clothing or any other purpose’.

So the inclusion of animal-sourced material in any part of the production process deems the final product unsuitable for vegans and strict vegetarians.

There are certain styles of beers, such as oyster, cream and milk stouts, which true to their names, traditionally contain ingredients of animal origin, lactose being one of them. That said, it is also possible to find vegan beers that mimic these styles without following original recipes and use vegan friendly substitutes.

Lactose as an ingredient is something to look out for. Not only is it likely to be involved in the styles already mentioned, it’s also something that low and non-alcoholic brewers commonly use to build body and mouthfeel in beers to deliver the same experience as higher alcohol beer. 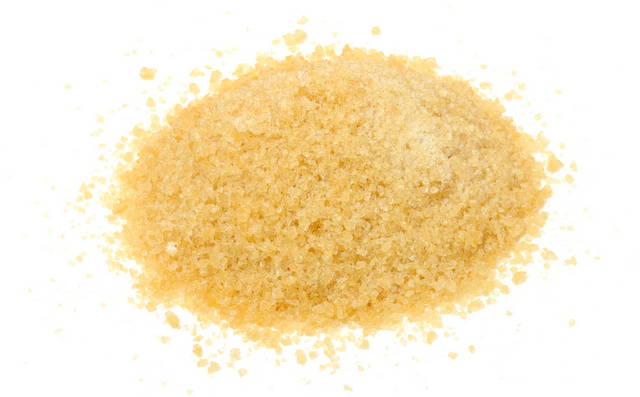 Beer finings made from isinglass

Finings are used to clarify beer at various stages of the brewing process. The process of fining typically involves mixing the finings into the beer which help to attract solids and haze-forming particles together to form larger particles which will settle out more quickly than they would otherwise. After allowing the mixture to settle or ‘drop bright’ in brewing terminology, the beer can be drawn off, leaving the finings and unwanted solids behind. A common fining agent for use in finished beer is isinglass which is made from the dried swim bladder of sturgeon and some other fish. Isinglass can be added after fermentation is complete and is regularly added directly into casks which are left to settle in the pub cellar. Other animal derived fining agents include gelatine and egg, although these are more commonly used in wine production.

In theory, all of the finings should have dropped out of the beer by the time you drink it, but this is not guaranteed and in practise, the beer itself can’t be considered vegan as it has required the use of an animal-derived processing aid during production. While for some, the idea of a fish’s swim bladder is enough to put them off their IPA, the very fact that fining is simply not an essential part of brewing good beer may serve as another reason to avoid it.

The purpose of fining beer is for appearance alone and in most cases does not significantly influence the taste. An evolution in brewing techniques is what has led us to expect beautifully bright beer, but don’t be put off by naturally hazy beer either, which by default is vegan friendly. That said, if you’re a stickler for being able to see through your pint, the good news is that there is such a thing as beer which is both bright and vegan.

There are a number of alternative ways to achieve ‘cruelty free’ bright beer. Plant-based finings have gained more popularity in recent years. ‘Irish moss’, a type of carrageenan seaweed is often added to the boil to help reduce protein haze. So called ‘silicated’ or ‘vegan finings’ are sometimes used following fermentation, but are still relatively uncommon and aren’t quite as effective as isinglass. Alternatively the beer can be filtered, centrifuged or (and this is our preference...) simply left longer to drop bright naturally.

Is my beer vegan? How do I know?

Though it’s not a legal requirement to list isinglass as an ingredient on beer labels, it’s likely that a beer which has been made using vegan friendly methods will say so on the packaging. However, finding the same information when scanning along pump clips is almost impossible.

A useful source to save you a lot of vegan-informed homework is Barnivore.com, a vast database that tracks vegan beers across the globe. Though the formatting might be a little old school, a quick beer name in the search bar will let you know where you stand in time to order your round.

So how do we make our beer vegan-friendly?

At Small Beer, we’ve re-worked the brewing process to create classic beer styles that are full of flavour below 2.8% ABV. Our innovative approach to brewing lies in choosing the finest ingredients and using them effectively. That’s why we don’t need to add lactose to our beer, despite it being a common go-to in low and non-alcoholic brewing. Instead, we build body and flavour by using twice the amount of ingredients per percentage point brewed and store our beers far longer than the industry standard, giving the yeast and proteins sufficient time to naturally settle out. This process is called ‘long lagering’ with ‘lager’ deriving from the German word meaning ‘to store’.

For us, it’s all about taking our loving and sweet time, without cutting any corners. The result gives us, and you, a range of four versatile beer styles below 2.8% that are all vegan friendly.

Who says you can’t have it all?