Is it OK to Drink Beer After a Workout or Before Exercise? 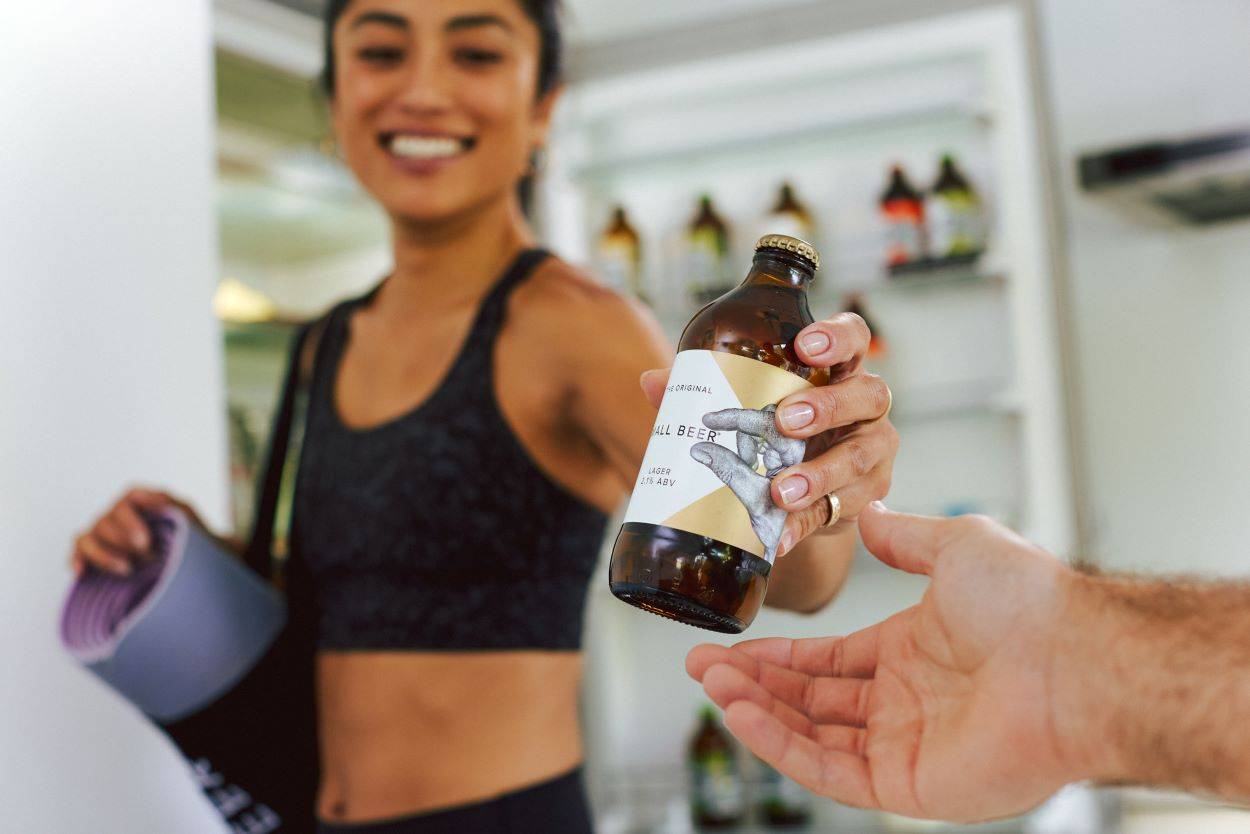 Do you like going for a beer after a workout? For many people drinking alcohol after exercise is all part of the experience. Many people enjoy a refreshing post-exercise drink at home or at the pub with friends.

But, if you've ever gone to the gym while feeling a little worse for wear, you'll know that alcohol and exercise don't always mix. Here's everything you need to know about drinking alcohol before exercise and after your workout sessions.

HOW ALCOHOL AFFECTS YOUR BODY

To understand the issues around drinking after exercise - or indeed before your workout - it's useful to know a little about how alcohol affects your body. Alcohol does a number of things which will interact with any exercise you do:

Why are we telling you this? Because, if you drink alcohol before or after exercise, these factors will affect your performance and recovery.

Wellness: How Does Alcohol Affect Your Mental Health?

WHAT ARE THE EFFECTS OF DRINKING ALCOHOL BEFORE WORKING OUT?

Let’s say you had a quick drink after work and are thinking of going to the gym. Or, maybe you had a big night but want to keep up with your fitness regime the morning after. Generally speaking, it's not a good idea to drink alcohol before exercise.

Even a small amount of alcohol can affect your coordination, balance and spatial awareness. That means you'd be much more likely to trip over, drop a weight or injure yourself in some other way. It's best to wait until you are fully sober before exercising.

In terms of actual performance, drinking one or two alcoholic drinks only has a small effect on things like speed or strength, according to a paper on the PubMed academic website. Of course, the more you drink, the worse your athletic performance gets.

What about exercising when you’re hungover? As with many things, it depends on the circumstances.

If you consumed lots of alcohol the night before, you might still be under the influence, so exercise sessions are not advised in this case. Indeed, it could actually be dangerous to work out, especially due to the risks associated with heart arrhythmias. Give it another 24 hours and you should be OK. If you only had a couple of beers the night before, a light workout in the morning should be absolutely fine.

HOW DOES ALCOHOL AFFECT YOUR RECOVERY AFTER EXERCISE?

Alcohol consumption affects your body’s ability to rehydrate. Since you sweat when you exercise, you will typically be dehydrated afterwards. If you then drink alcohol after exercise, it’ll take you longer to rehydrate and recover (which will leave you feeling sore for longer). That said, a study in the Journal of Applied Physiology found that rehydration after sport is only delayed if you consume alcohol with an ABV that is greater than 4%. So if you do want to drink beer after a workout, choose a low-ABV option such as any of the beers from Small Beer’s range of classic styles.

Drinking alcohol after exercise also reduces your body’s ability to synthesise proteins. When you exercise, small tears appear in your muscles, and your body uses protein to rebuild these torn muscles. However, drinking alcohol makes it harder to use proteins according to the PLoS ONE journal – so you’ll build less muscle than you otherwise would.

Weight gain is also an issue if you're drinking alcohol after exercise. Alcohol is a source of so-called ‘empty calories,’ which means that it provides lots of energy but little nutritional value. Ultimately, this means that the calories you consume from alcohol are more likely to be turned into fat.

A silver lining, at least for beer drinkers, is that lagers, ales and stouts are probably the ‘least bad’ option if you must drink after exercise. Beer tends to contain more electrolytes and carbs than spirits or wine, which both help your body recover (this is explained in greater detail by Jenaed Brodell, a dietitian and sports scientist speaking to Healthline).

Staying Fit: How Many Calories Are In A Pint of Beer?

CAN YOU DRINK BEER AFTER A WORKOUT?

Drinking a beer or two after a workout is not necessarily a problem, but it's important to be mindful of how it may impact your body's abilily to rehydrate and recover.

If you regularly play competitive sports or you have a specific fitness goal in mind - like an upcoming marathon or even a cycling holiday - it’s worth weighing up the pros and cons of drinking alcohol around your physical activities. While the occasional beer isn't a disaster, regular alcohol consumption could really set you back if it causes hangover-induced sluggishness or even weight gain.

On the other hand, if you're exercising for fun or to keep up your fitness levels, there's no need to worry about the impact of moderate alcohol consumption.

If you need any motivation to keep exercising, a study published in the British Journal of Sports Medicine found that regular exercise can effectively ‘cancel out’ some long-term health issues associated with drinking. We can drink to that!

“People can have three of four Small Beers and no hangover. That’s a great post-run beer!”

FOR BEER LOVERS WHO WANT BALANCE

Drinking Small Beer after a workout - alongside plenty of water - can provide you with the proteins and carbohydrates that you need to support recovery after vigorous exercise. All of our beers are low in calories and carbs, which is even better news if you're watching your weight.

Everything we brew at Small Beer is driven by a commitment to help people balance great-tasting beer with a healthy lifestyle. We don't believe you should have to compromise on flavour and certainly think there's more to life than choosing between all or nothing.

Our session beers, brewed below 2.8% ABV, are both refreshing and hydrating, which crucially means you can drink it without feeling hungover the next day. Browse our range below and find your favourite new beer. 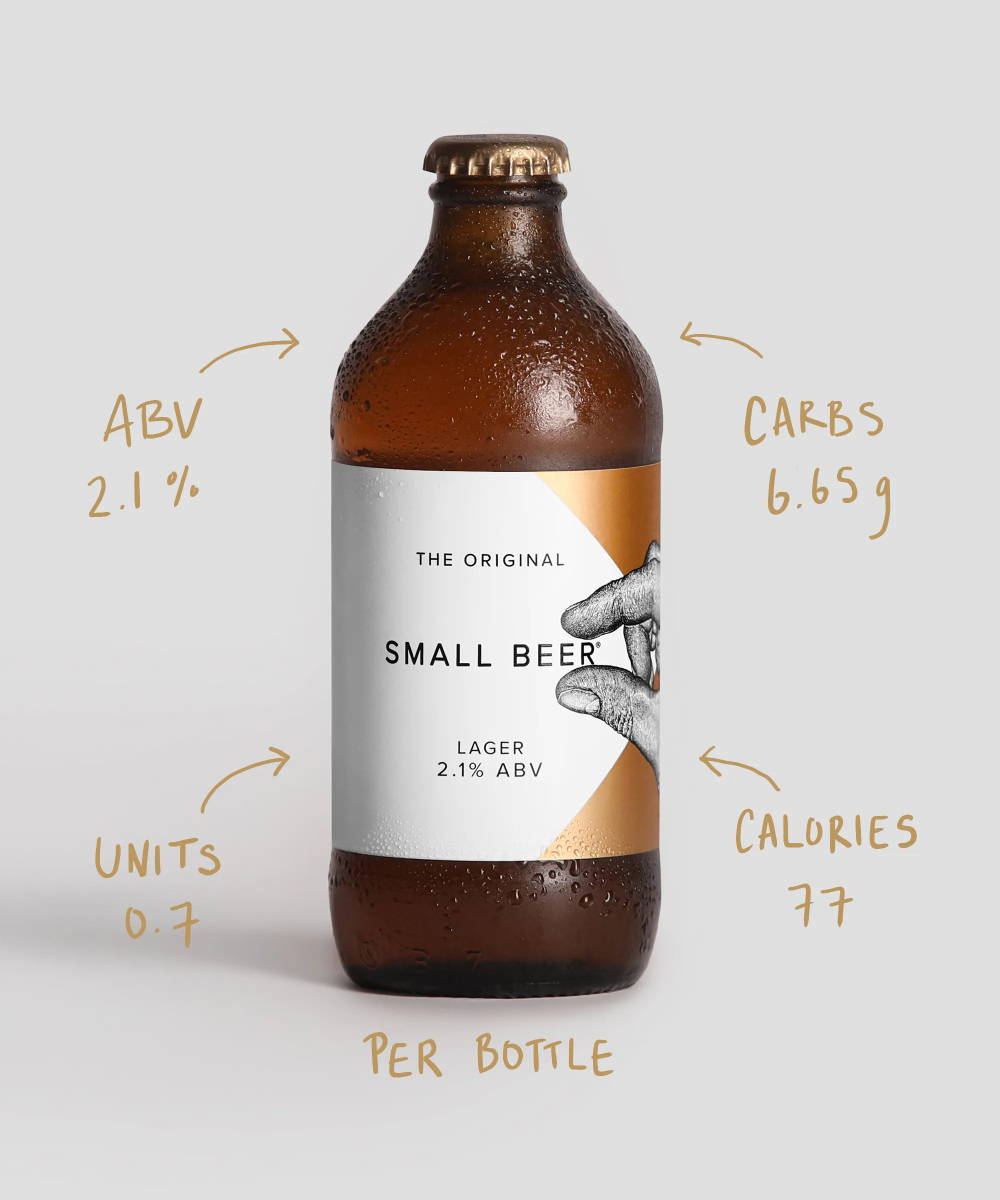 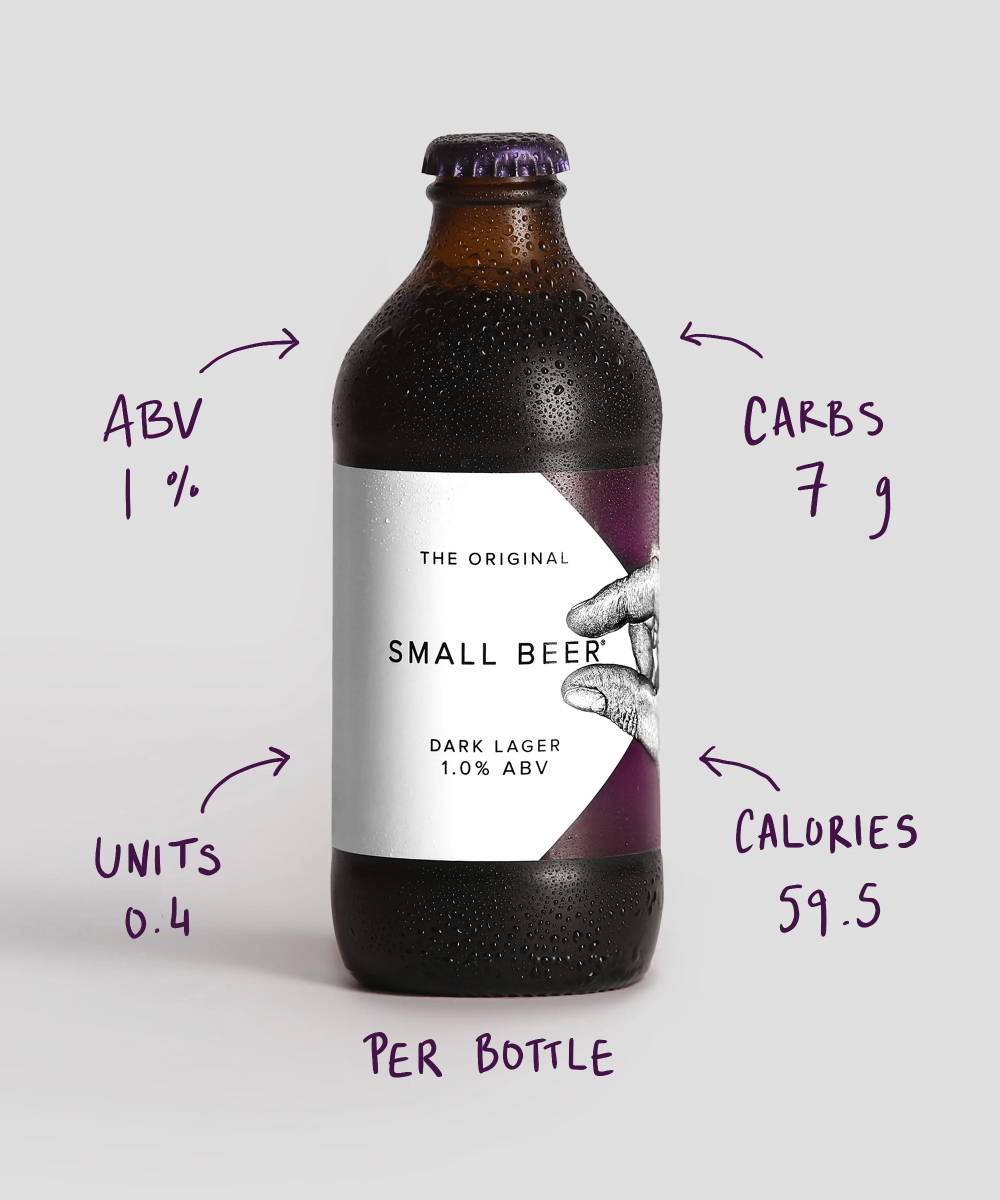 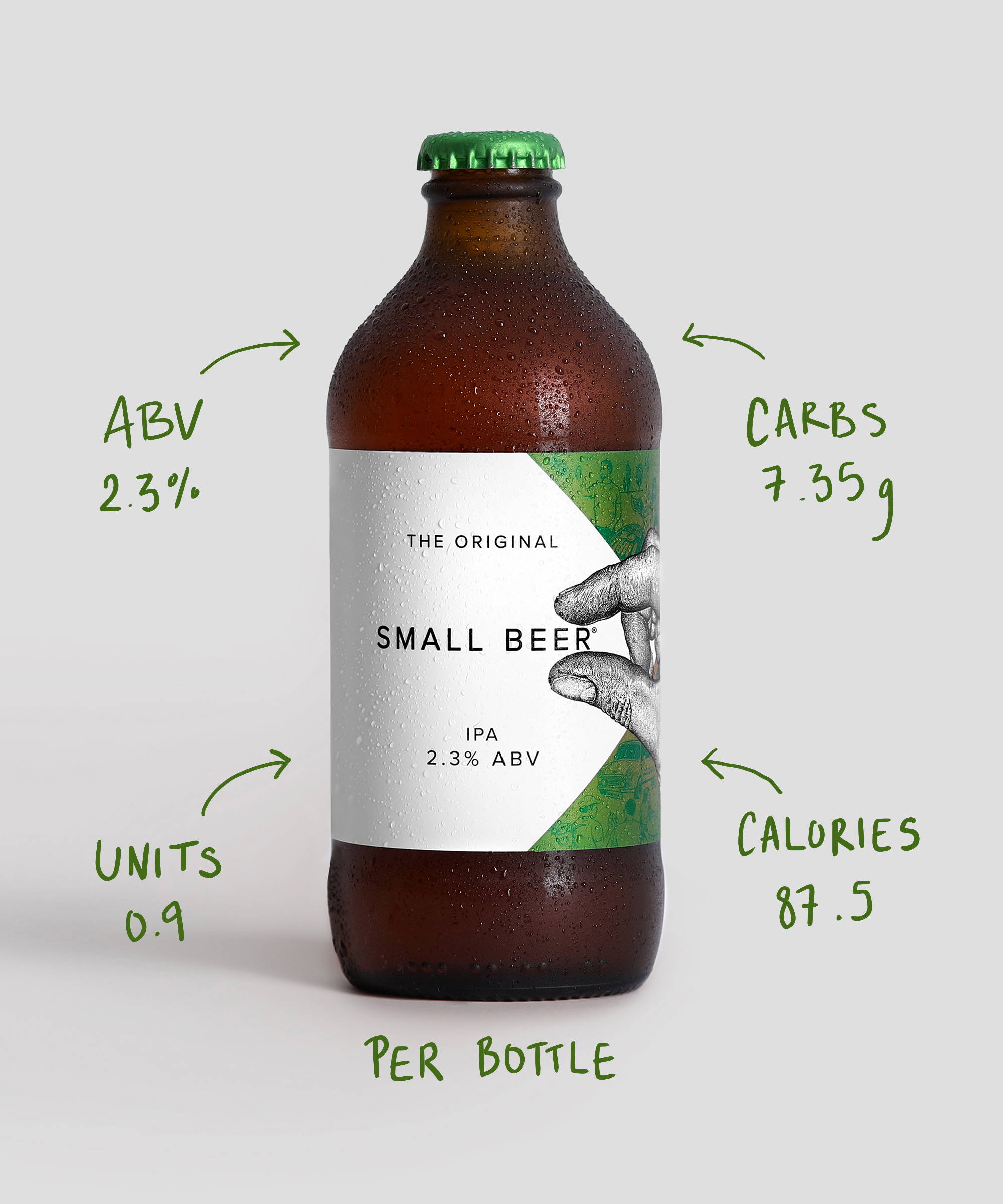 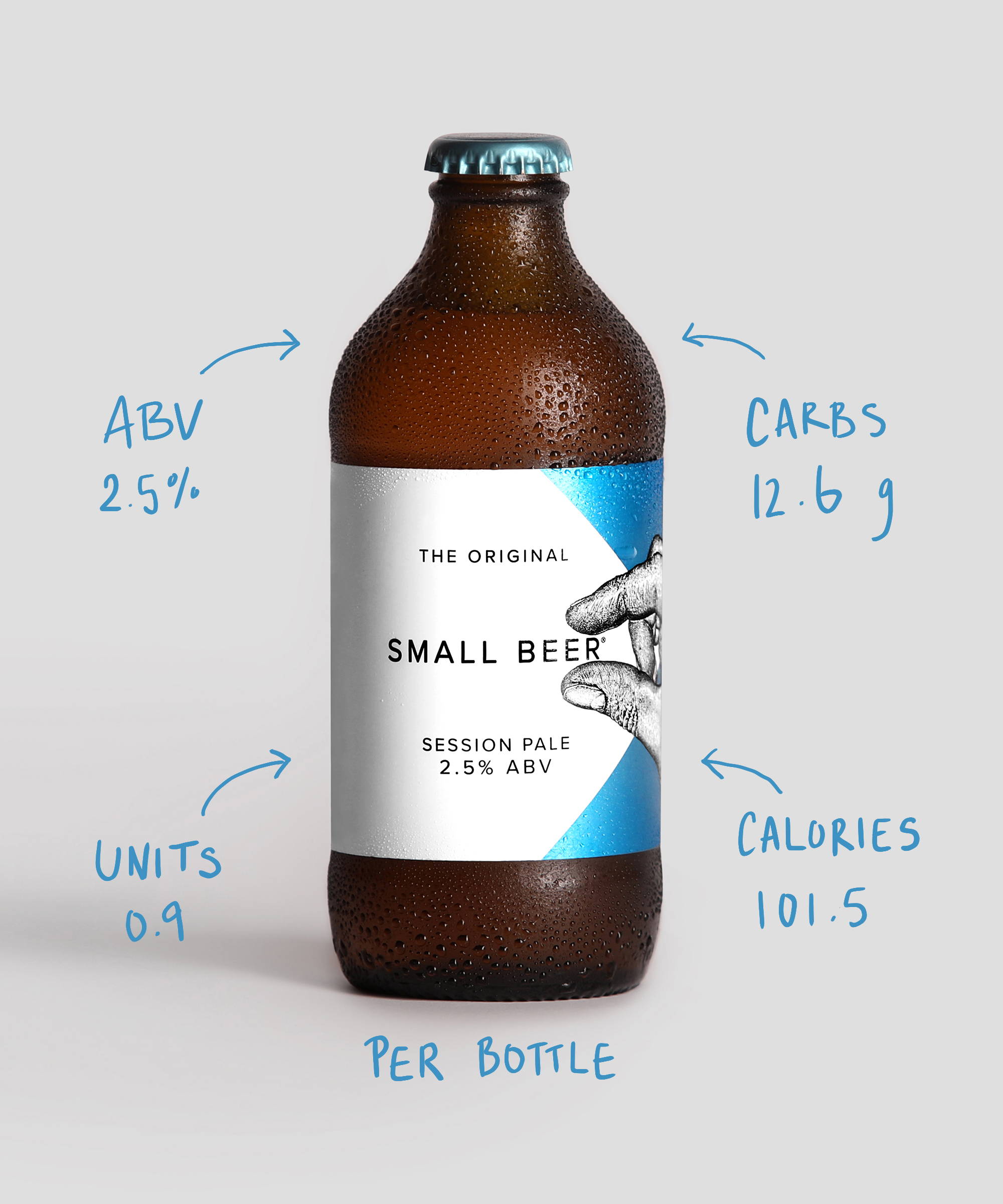 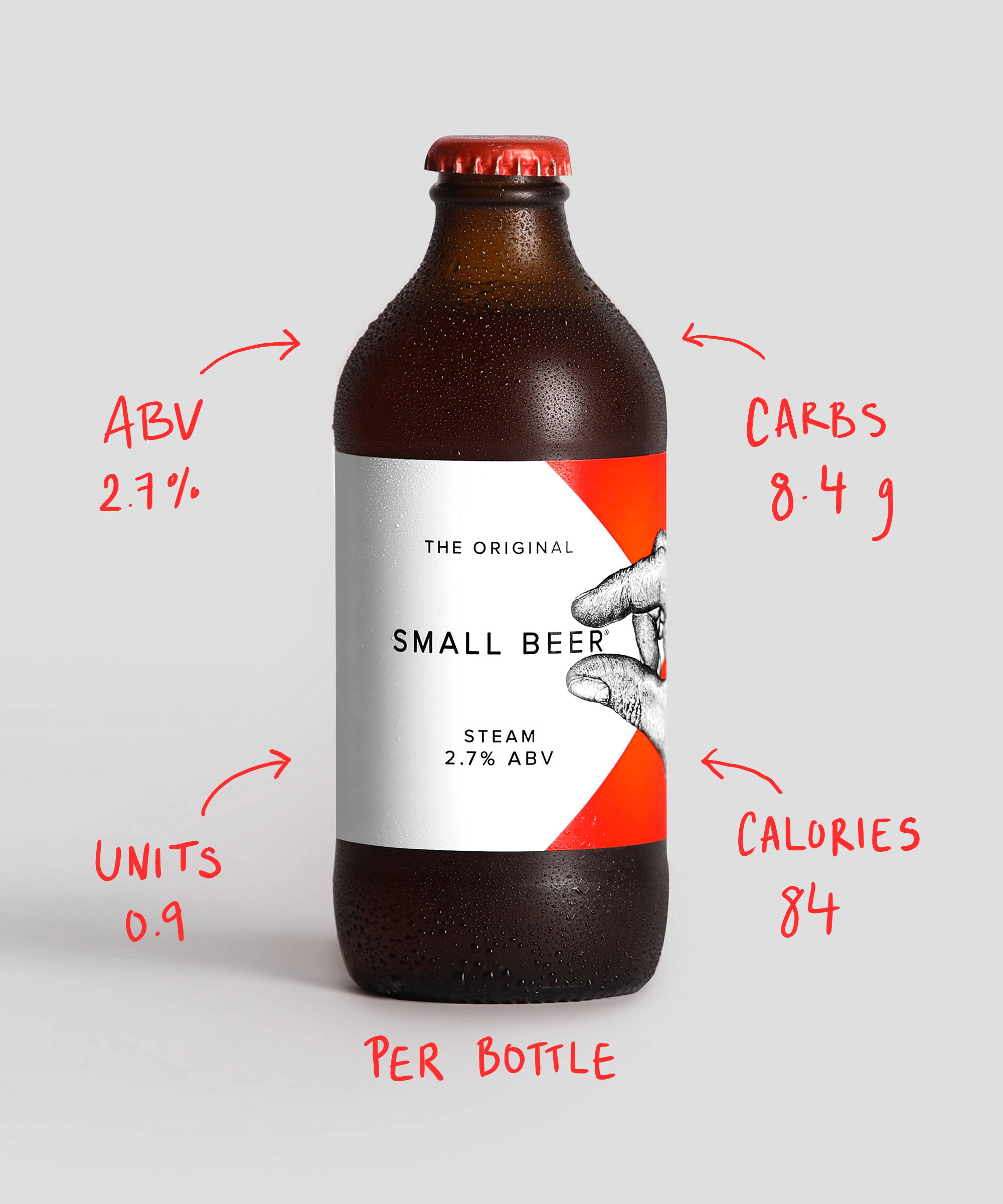